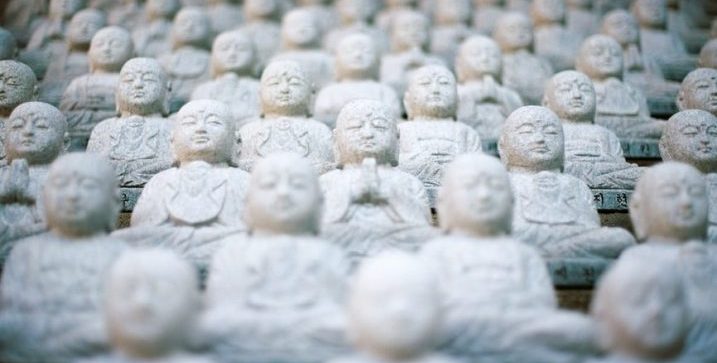 If you are interested in the work of the Sir Arthur Conan Doyle Centre it’s almost certain that you have thought about Buddhism. In fact words like mysticism and meditation may conjure up images of the East more readily than they make you think of the Western tradition of Meister Eckhart and The Cloud of Unknowing.

Since Europeans began to take an interest in eastern religions in the nineteenth century, perhaps since Edwin Arnold’s long poem about the life of the Buddha called The Light of Asia (1879) and certainly since Christmas Humphreys wrote the first books in English about Zen in the 1950s, most Westerners who see themselves as spiritual rather than religious have been aware of a benign pressure coming from the East. We all know of a Yoga Centre near us and we all know that meditation starts with sitting and emptying the mind like a Buddhist monk. My question today is: how are we supposed to think about that? Should we all be Buddhists now?

The Dalai Lama doesn’t automatically answer Yes to this question. He has said that his message is that Buddhism can help people to be a better version of whatever they already are. I take this to mean that if you have a spiritual practice of whatever kind then meditation, clarity and self-awareness will enhance it, which is a sort of useful low bid and surely a very good practical idea. But is there something more here for us? Some thought that will take us into the heart of Buddha’s teaching and bring us some of the peace that is alleged to be found there?

The good news is that if we do take one more step towards the East we may well find it quite simple – and it is likely to be liberating. The step I have in mind here involves the first of all Buddhist teachings – detachment, though that’s a concept that has to be got right because it can sound selfish.

We might think of detachment as cold, as a recipe for separating ourselves from other people, but that isn’t what the Buddha meant by it. He always added, as all Buddhists still do, ‘and compassion’ – as in detachment and compassion. But how does this work? I’m going to give you an example, a story taken from life.

In the early twenty-first century there was a father who had a daughter whom he loved. At first she loved him too, but when she became a teenager she began to adopt the violent indignation of many young people at that time; she became resentful of the older generation and in particular critical of her father. For her he was hopeless – a part of what was wrong with the world: he was conservative, not fully-attuned to the new ideas about the sexes and about race, inclined to generalise (something she called ‘stereotyping’) and really a bad man. His respect for things military, for instance, based on his own father’s gallant conduct in World War Two, was incomprehensible to her (she referred to her grandfather as ‘a murderer’) and she applauded the pulling down of statues and the cancelling of the bad culture of the past.

Nothing her father did could be right in her eyes and her negative feelings made their relationship steadily more difficult. Whatever his occupation she let him know at every turn that he should really be out there helping the underprivileged, which he wasn’t; seeing him buy chicken she angrily observed that only free-range poultry was acceptable and refused lunch; discovering that he had voted for a non-socialist party at an election she swore at him. All discussions with her became like walking over a minefield – he never knew when the explosion would occur. Until one day, when things were very bad, he thought to himself ‘Well, this can’t go on. I know what I’ll do – I’ll detach myself from all this – I’ll just not engage!’ It sounded Buddhist, in a way, and it would give him some sort of breathing-space at least.

Of course he felt guilty. Did this detachment amount to not loving his daughter? Surely he did love her and, anyway, on some Christian or spiritual basis, surely he should love her, no? That seemed clear. So what ought he to do now?

As these things happen, one random day, thinking about nothing in particular, he saw in his mind’s eye, complete with saffron robes and a shaven head, a Buddhist monk. The sort of teacher you can find on YouTube pretty easily, smiling and enchanting an audience with the paradoxes and jokes of Zen. This monk came into the father’s mind simultaneously with an idea that filled his head and his heart and solved his problem: he suddenly saw that there was no opposition between detachment and love. Quite the contrary: only if he detached from her could he love his daughter.

And what did that mean? Gradually it dawned on him: of course, it meant detaching not really from her but from himself. He saw that his recurrent thoughts about her shouldn’t run along the lines of ‘She is behaving aggressively. What’s wrong with her? It isn’t fair to me. How can I be expected to conduct a good relationship in the face of all this criticism and hostility?’ His thought should be ‘It would be better all round for me not get upset about this.’

He looked at the face of his visiting mental monk and realised that he couldn’t imagine seeing it in a grimace of anger or anxiety or any other disturbance, only with that little smile. The monk was untouched by the bad behaviour or anything else that confronted him; he was detached from it. Detachment is something you do to yourself, not to other people.

The condition of forgiving others, of being compassionate, is paradoxically to detach from your own feelings. Not from your own simple judgements of course – you’re still allowed to notice hostility and aggression and they are still not good – but to detach from the anger and negative responses that the hostility creates inside you. Once clear of that you can allow sympathy to flourish because you aren’t blocked by your own pain. A more detached love told this father not to be so anxious about his daughter – to let things cool down, to give her space. This would be the opposite of anger (which wanted to exclaim ‘After that conversation I’m never going to speak to her again!’) and instead be a bit a little removed from her but not alienated. Instead of seeking a fight he would let her be.

If you can detach from things then you can get out of your own way. The presence that stands between you and your enemy is yourself – sometimes known as ‘your feelings’. The good news is: you’ll find that removing yourself is a lot easier than trying to change your enemy. And it’s much less likely to be based on the strident, defensive nonsense that your ego always has ready for you.

So Buddhism: it’s not just meditation, mindfulness and the other methods we have learnt from the East. It’s also the detachment without which there isn’t enough space to love.