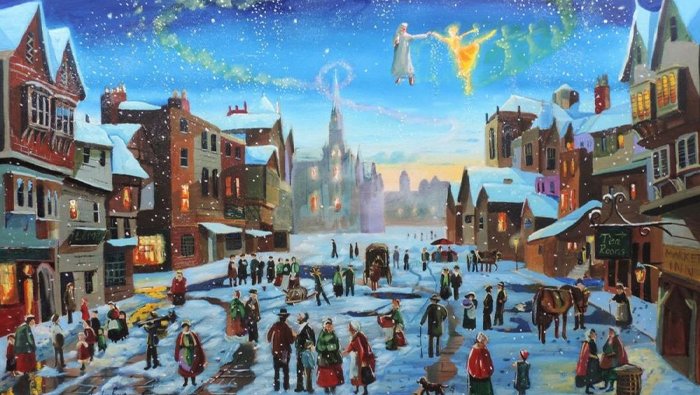 It’s Christmas again. So it’s a time when we think rather automatically about religion. I suppose we do the same at Easter and no doubt people from other religious backgrounds have similar moments in the year when they wonder, however vaguely, what they might ‘still believe’ or what the importance of religion is ‘today’.

That ‘still’ and that ‘today’ signal how we live now in a post-Christian society with, in the UK, a smaller admixture of Islam, Judaism, Hinduism and so on. We many of us ask such Christmas questions as: What is the point of religion? Should I bother to take my children to Midnight Mass? Will we even mention baby Jesus on Christmas Day? Why might we not? Why did church seem so important for so long? People really cared a great deal about it and now, on the whole, they simply don’t care. How should I think about the remains of religion? These are the questions so brilliantly asked in Philip Larkin’s poem ‘Churchgoing.’ Take a look at it.

One of our best-known Tuesday Talk speakers, Rupert Sheldrake, is a serious biologist and a serious researcher into what is known as the paranormal and he is also a practising Anglican. He writes books with titles such as Ways to go Beyond where the ‘Beyond’ is more or less an indication of what in religious vocabulary would be the ‘transcendent’. But how does he square this circle?

Well, I agree with Rupert that paranormal phenomena are better considered as normal – it’s just that they’re a different part of normality. We were brought up to think of religion as something different, say ‘super-natural’ but surely it isn’t. It can’t be. Nothing can.

Looking at the topic more broadly it’s clear that we who study the ‘spirit’ are slightly embarrassed. After all we have crept up onto some very religious ground. The Near-Death Experience is rather worryingly similar to traditional accounts of Heaven; Eben Alexander’s book about his NDE is actually called Proof of Heaven and when I suggested to him after his Tuesday Talk that he had ‘re-invented religion’ he smiled but he replied ‘Yes!’ And yet the answer is obvious: ‘heaven’ is a creation of our consciousnesses – just like everything else. If the afterlife is ‘sacred’ – so is life.

So we should follow Rupert Sheldrake, not necessarily into church and certainly not into blind belief, but at least into an openness to the deeper idea that the ‘beyond’ is also here and now, that the transcendent is as much inside us as anywhere else. And that one really can’t go wrong in the ‘spiritual’ world. God, to use a convenient word, must surely be inside us, and inside every sub-atomic particle, and everywhere and… well, anyway, not just in church.

But then this liberates us to ‘find God’ (you can translate that into your own vocabulary for dealing with consciousness, being, the anomalous-experiential as witnessed in NDEs for instance) anywhere at all – including in church. I don’t think Jesus was really born in a miraculous way, nor is it probable that a special star shone on his birth except by chance. But the thought, the experience of singing together, of stories being told of something non-commercial, the light of candles symbolising the consciousness which is our privilege, all these things are a species of detachment – detachment from ourselves, from the anxious ever-chattering mind, from one face of the world. The other face is more present to us than anything else, even than the things we deal with every day, once we let it be. And anything which can remind us of that has to be useful.

Climb a hill; listen to Mozart; laugh. Or join in some carols, light a candle, drink the wine and bow. It may help you be in the Now that is all that there is. You may find you feel free. Freer than if you don’t.