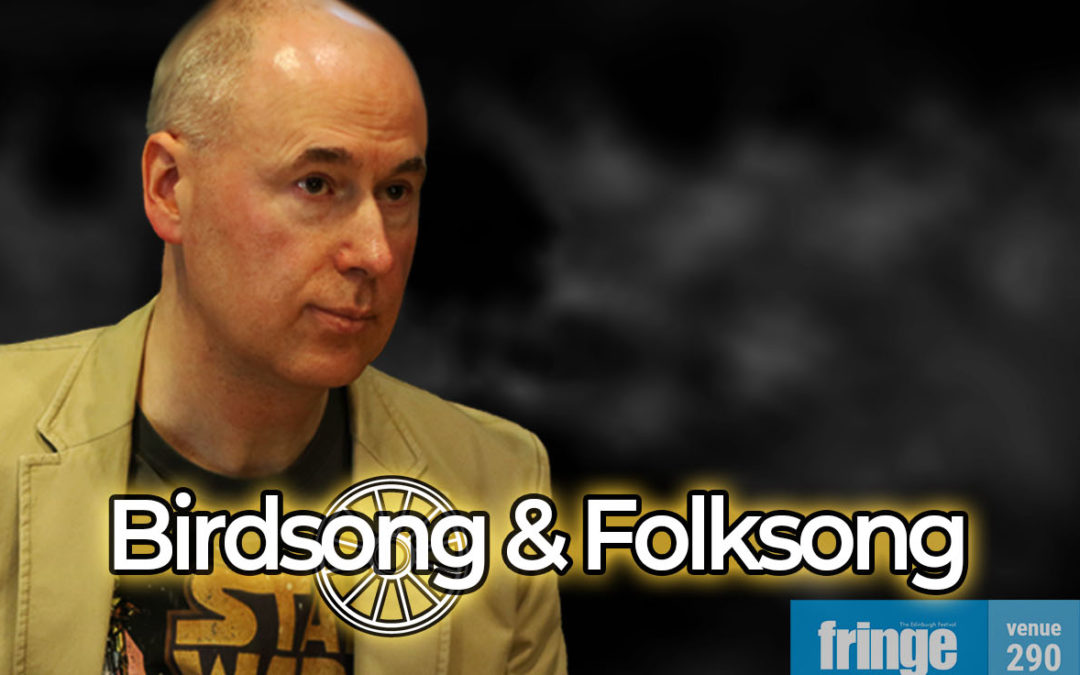 Meet Tony Randle. The man behind ‘Birdsong and Folk Song.’ This year is his Edinburgh Fringe Debut.

Would you tell us a little about yourself?

I am a guitarist and composer. I play all kinds of guitar. Lately, I’ve be focusing on the nylon string, classical. Or ‘Spanish’ guitar as it’s sometimes known.

You’re about to perform at the Fringe for the first time – how do you feel about it?

Myself and my vocalist, Alice Williams, are pretty excited about the whole thing. There’s a lot of planning and rehearsing gone into preparing for this. We’re looking forward to it all coming together.

“Birdsong and Folk Song” is coming to The Arthur Conan Doyle Centre, what can you tell us about it?

It’s an acoustic duo act with me on guitar and Alice on vocals and flute. Some of it will feature solo guitar pieces.

Where did the name “Birdsong and Folk Song” come from?

Well the Birdsong part comes from a project which came about when I took up birding. I started recording calls and sounds instead of photographing the birds. I had it in mind to compose something relating to the whole experience of being in the countryside. The scope of it was such that it was a long time gestating.
Then, a chance conversation with one of the staff at WWT Arundel led to an invitation to play at the centre. There’s nothing like a deadline to focus the mind. I realised that a series of pieces on specific birds – their character as well as their calls – was what I needed to do.
Fortunately, it all came together for my first performance! It was a rare opportunity to play music at the place of its genesis, and I was lucky enough to be asked back several times.
When I was planning to come to Edinburgh I decided to mix the acoustic solo pieces of Birdsong with some actual songs. Being played acoustically meant I selected folk oriented pieces mostly. Some are about Scotland in various ways. Hopefully no one will mind if a couple stray slightly towards pop or jazz for variety….
So hence “Birdsong and Folk Song.”

“Birdsong and Folk Song’s” inspiration is the WWT Arundel Site. Do you often seek inspiration from nature? what influences your creative process most?

The Birdsong CD strapline is ‘Music inspired by nature’. Actually though, inspiration can come from anywhere. As long as you reflect your own experience as honestly as you can. The songs have many different sources. One of them is even about shipbuilding in Govan!

How would you describe what to expect from your show, in three words?

The Great NHS Bake Off

The Sir Arthur Conan Doyle Centre is ever growing, but who is making that happen? Drawing in more and more people across cultures, across spiritual practices, across continents... the centre is an interconnected village of free spirits, artists, teachers, speakers and...
Read More

A Message from Our Chair, Ann Treherne

Hi Everyone, I hope you are all staying home and staying well during these difficult times.  I am 'shielding' my elderly parents (87 and 88 years old) who live with me and I'm finding it difficult staying in and avoiding contact when you are so used to being active...
Read More

Numbers are everywhere. Like God, or Source, or whatever you wish to call it, numbers are omnipresent. Indeed, everything which has FORM also has NUMBERS. Think about it: height, weight, age, phone number, house number, you name it, wherever you find NUMBERS you find...
Read More

The 2020 Horoscope: Are you looking forward to the new decade?

Are you looking forward to the new decade? Need a breath of fresh air, a new beginning? Will 2020 make all your dreams come true? Looking at 2020 astrologically, big things are happening. You might have heard about the massive Saturn Pluto conjunction on January 12th,...
Read More

"By Chloe Deas In Scotland, Hallowe'en has always been a night of significance.  The Celts celebrated "Samhain" as their New Year. It was a fire festival and its focus was on chasing away the darkness of the long nights. It was also a 'Feast of the Dead', where to...
Read More