On 22nd June, The Arthur Conan Doyle Centre welcomes Dr. Michelle Foot, Teaching Fellow at The University of Edinburgh, to give a lecture on the History of Spiritual Art. The lecture will introduce attendees to a full array of spiritual artworks, all created by the Artist and Spiritualist Jane Stewart Smith (1839-1925).

Dr. Michelle Foot will discuss the symbolic and impressive painting, The Dawn of Peace, which took Jane Stewart Smith over 30 years to complete.

Could you tell us about yourself and your background?

I am currently a Teaching Fellow of nineteenth-century art in the History of Art department at the University of Edinburgh. I was awarded a PhD from the University of Aberdeen in 2016 for my doctoral thesis which focused on the topic of Modern Spiritualism and Scottish art between 1860 and 1940, and which I am now re-writing as book for publication with Bloomsbury. In 2018 I became a Trustee of the Arthur Conan Doyle Centre.

As an art historian my interest in Spiritualism is not to prove or disprove the claims of Spiritualists at any point in history, but rather to understand the cultural and historic impact of such claims and beliefs. In the case of my research, I’m specifically interested in discovering how artworks in the late nineteenth and early twentieth centuries were inspired or influenced by Spiritualist beliefs and practices.

How would you describe Jane Stewart Smith as an artist? Particularly as a female artist in the 19th Century.

She’s very interesting for a number of reasons. There were lots of female artists in the nineteenth-century but then, as is the case now, they did not receive as much recognition as their male counterparts. This was because women were typically supposed to stay in the domestic sphere, running their households and looking after their families.

Smith wasn’t a professional artist as such. If census entries are anything to go by she didn’t note her occupation as an artist. However, she did exhibit regularly at the Royal Scottish Academy in the late 1860s and early 1870s and she sold her work to a few collectors. She was well-connected to the artistic community of Edinburgh.

Her brother-in-law was the artist John Douglas Michie and her husband was a picture framer, carver and gilder for many of the Royal Academicians (members of the RSA). She had her own solo exhibition in 1915 in Edinburgh and in 1920 in London. 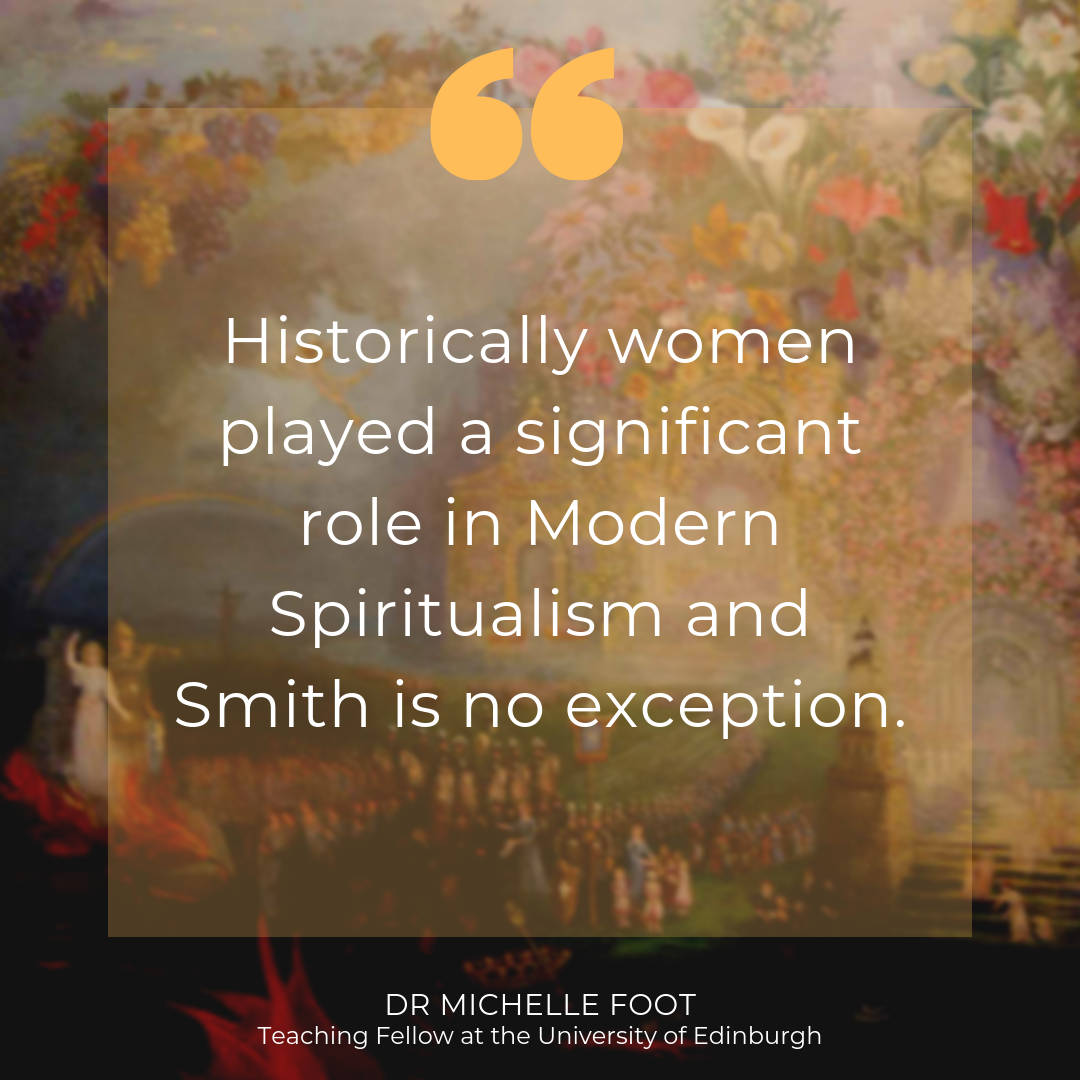 Women were at the forefront of the organized effort to promote Spiritualism as a spiritual movement and many were leading mediums traveling nationally and internationally to give demonstrations, lectures, and séances at a time when expectations for their gender restricted what they could and couldn’t do.

In a few words, how would you define the term Spiritual Art?

I don’t know if that is possible in a few words! In the broadest sense of its meaning, every artwork could be defined as ‘spiritual’ in some way. Art allows both the creator and the viewer make sense of themselves and the world around them. That process of reflection and discovery, or re-discovery, is spiritual.

In terms of the artworks I focus on for my current research, I mostly look at Spiritualist art which is much more easily defined as having been inspired by Spiritualism in some way. This usually takes two forms in the late nineteenth and early twentieth centuries.

The first is séance-art: paintings or drawing produced by a medium during a séance. The second form is art that focuses on the topic of Spiritualism but which isn’t necessarily produced by mediumistic practices or psychical means. For example, a painting which depicts the contact of the spiritual and the material.

Your research interests include Spiritualism, Scottish Art and Celtic Revival. When and how did you first develop an interest in these topics and more specifically in the 19th Century art period?

It was during my undergraduate studies in History of Art at Aberdeen. Actually, I tended to opt for courses which looked at art from the sixteenth and seventeenth centuries, such as Italian Baroque, hybridity in Colonial Latin-America or court art of the Stuart monarchy. But I also took Scottish art courses which covered material from the Picts to the present day, including the Celtic Revival.

It was during these Scottish art courses that I developed a deep curiosity and interest in the topic of Scottish art history and I chose to focus on late nineteenth-century Scotland for my dissertation. I became intrigued by religious revivals from that period and the role of religion or spirituality in national identity.

This eventually led me to investigate the cultural impact of Modern Spiritualism in Scotland between 1860 and 1940 (a timeframe which coincided with the Golden Age of Spiritualism), and how and why it may have inspired Scottish artists.

Nobody had written about this subject before so when I started my doctoral research I really had to start from scratch and use limited scholarship in loosely-related areas to begin piecing together the history and its importance.

However, most of the research was sitting in archives and looking at the original sources which had so far been forgotten.

That’s why research is so much fun, you’re essentially a detective looking for evidence and solving a puzzle.

Of course, Jane Stewart Smith’s painting ‘Dawn of Peace’ is an excellent example of what I was looking for and reassured me that the questions I was asking could be answered.

What should the audience expect to learn or discover from your lecture? Are there any teasers you can give?

I’ll speak about Jane Stewart Smith’s paintings – what we can see, what it means on a symbolic level and I’ll discuss how it relates to the context of Victorian Edinburgh and Modern Spiritualism at an international level.

I’ll explain how the haunted sites along the Royal Mile are relevant to Smith’s Bygone Days Series and I’ll point out some of the most interesting features in her painting ‘Dawn of Peace’, which is packed full of detail.

If there’s time, I may even reveal a possible connection between ‘Dawn of Peace’, Morgan Spiced Rum and 25 Palmerston Place.

If you would like to join Dr Michelle Foot on the 22nd June, purchase your ticket Here