While there might be a particular detective that comes to mind when you think of Sir Arthur Conan Doyle, here at the Centre we have our very own super sleuth. Eleanor Docherty, one of our wonderful volunteers, has gone to incredible lengths to dig up little-known truths about Sir Arthur Conan Doyle and the history of our Centre here in Edinburgh’s West-End.

From uncovering blueprints of our Victorian townhouse to letters between Conan Doyle and Joseph Bell (the true inspiration for Sherlock Holmes) Eleanor has shown a real knack for investigation. Visiting libraries and archives she has even had the privilege to see original manuscripts of Sherlock Holmes novels, as well as unheard of tales Conan Doyle wrote as a young man.

One of these manuscripts was “The Haunted Grange of Goresthorpe”, a short ghost story he wrote around the age of 18 years old. This was thought to have been lost, but turned up in a library vault in the 1960’s and is now held within the Special Collections of the National Library of Scotland. She was also able to obtain a facsimile letter from the Royal College of Surgeons, which Conan Doyle wrote to Joseph Bell, confirming “it is certainly to you that I owe Sherlock Holmes”. We are very excited to have been granted permission to display this facsimile in our Sherlock Holmes Tearoom and Eleanor has provided both a transcript and some background information about the letter and the relationship between Bell and Doyle.

Last year Eleanor received a certificate from the Mensa Sherlock Holmes special interest group that she is a part of for the outstanding work she has done with them, having written articles which were published in the Baker Street Times. One of her articles was even reproduced by the Conan Doyle Estate! 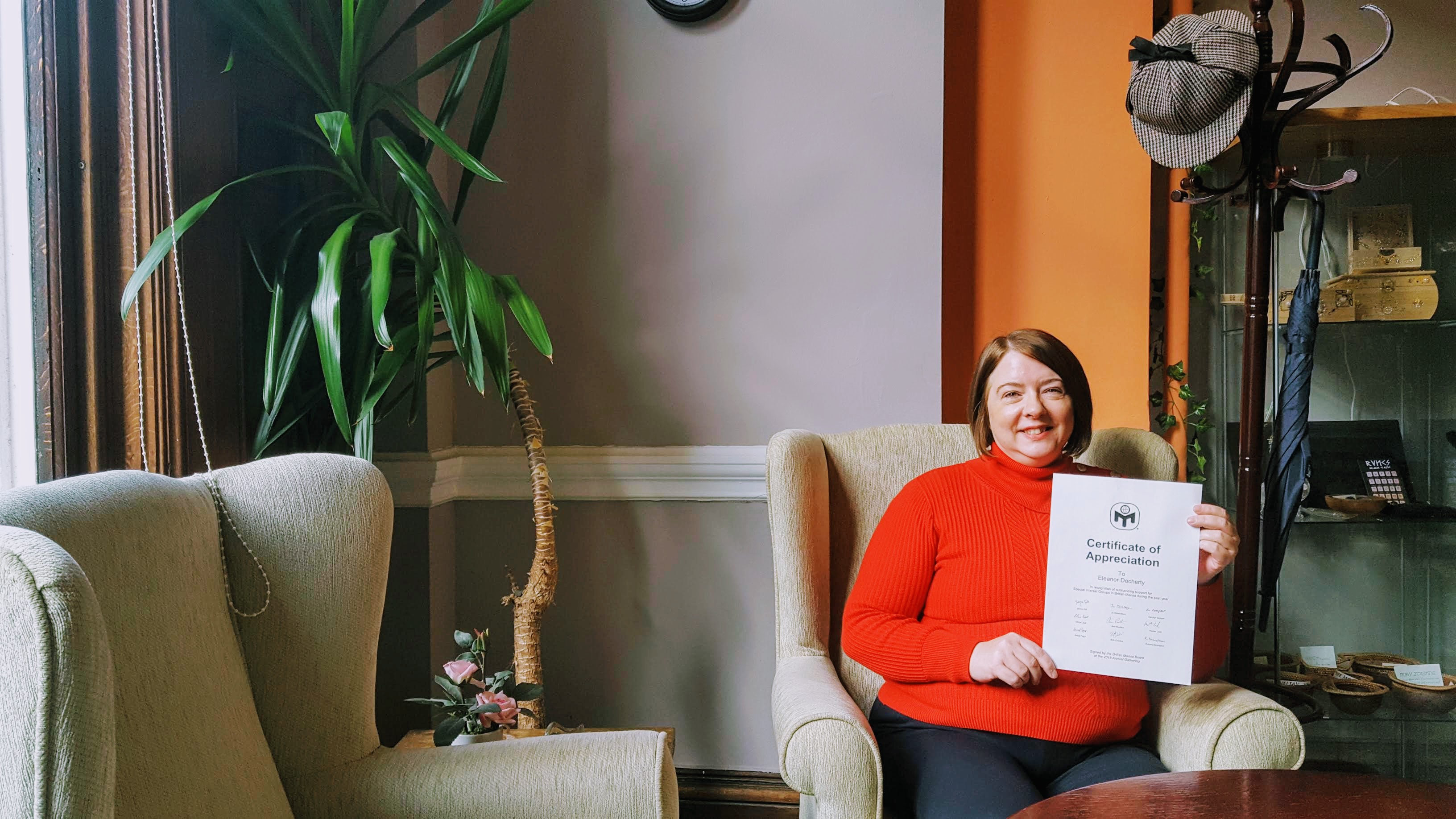 Eleanor is renowned at the Centre for the tours she gives of the building, delving in to the history of the impressive townhouse and the layers of hidden meaning behind The Dawn of Peace, an impressive oil painting by Mrs Jane Stewart Smith that hangs in our library, and many other intriguing tales. Ever going above and beyond, Eleanor has compiled all this information in a visitor guide which can be purchased online or from the Centre.  The guide takes you round the entire building, telling you about it’s previous illustrious owner and how it came to be the Sir Arthur Conan Doyle Centre.

One notable tour last year saw Eleanor showing Cathy Beggs, the great-niece of Conan Doyle around while she was Edinburgh for the launch of the Sherlock Holmes tartan which we now have for sale in our shop. The Sherlock Holmes tartan was designed by Tania Henzell, the step-great-great granddaughter of Arthur Conan Doyle. She used colours, which reflect the life of Conan Doyle, with the broad blue and green stripes representing his Irish and Scottish heritage, the thin yellow line representing the deductive clarity of Holmes and the thin blue line representing the Reichenbach Falls.  Of course, the Reichenbach Falls is where Conan Doyle sent Sherlock Holmes and his arch-enemy, Professor Moriarty, plunging to their apparent deaths in “The Final Problem”, causing great public outcry.

Eleanor’s current research project is an extensive archive of the life and family of not only Conan Doyle, but also Joseph Bell and William McEwan (the original owner of our building and a well renowned Edinburgh politician, philanthropist and brewer). She will also be giving a talk during this year’s Fringe Festival on the curious history of Sir Arthur Conan Doyle and his links to the world of Spiritualism – with a tour of the Centre afterwards!

Be sure to sign up to our mailing list below for updates on the show, plus more exciting news and future blog posts from the Sir Arthur Conan Doyle Centre.