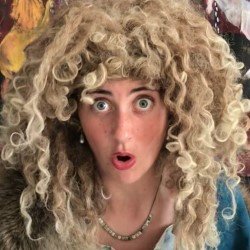 Can you tell us a little about yourself?

It all began when I was five and was regularly murdered – I played the duchess’s daughter in the Royal Shakespeare Theatre, Stratford-Upon-Avon, production of The Duchess of Malfi! Margaret Plantagenet (aged nine), was my next RSC role. This time my father was murdered – in a butt of Malmsey wine! More light hearted roles have ranged from Tatiana Romanov in Otma’s Glory, Moth in A Midsummer Night’s Dream and Lydia Bennet in Prawn and Prejudice (film).

Studying at Edinburgh University has been one big drama! I have been on night patrol on the Pentland Hills with the Officer Training Corps, sailed the seven seas with the university’s Navy Unit, sang my heart out in Gilbert & Sullivan’s HMS Pinafore, run my legs off with the first lacrosse team, and worked my fingers to the bone producing six editions of my history satire magazine, The Plague – free copies available at my show!

Is this your first time performing at the fringe? (If yes, how do you feel about it?)

Could you describe to us, briefly, what your show is about?

Set in a TV studio, News@1066 puts history straight! Roving reporters get to the bottom of history’s biggest stories.

Fast-moving and wacky, this one-woman comic show races from one breaking story to the next! Historical fact mixes with modern technology – screen, sound effects and music as anchor woman Alice Roberts interviews live celebs from the past. (Spoilers: Anne Boleyn in a lifejacket and Richard III’s parking fine).

This show is a belly full of laughs – accessible to all. Totally unique and jolly good fun!

As I slumbered in my stone turret, trying to think of a name for the show, an arrow flew threw the window, narrowly missing me! Tied to its shaft was a piece of parchment, and clearly visible was the royal seal of Harold. What could this be? I unrolled the parchment, and there was a message from the king himself (such an elegant hand). It read: “Go forth, and call your show ‘News@1066’. I have a feeling this date will become quite memorable”. As a loyal subject, I could only obey this royal command.

Can you describe to our readers, in three words, what they can expect from your show?

To attend the show, book your space here