What Can Astrology Do For You?

Help From the Stars: What Can Astrology Do For You?

In the context of mainstream culture, astrology is known for its presence in the horoscope column of a lifestyle magazine with your zodiac sign being based on the day and month you were born. However, there is a much more subtle world of astrology out there waiting to be discovered which has the potential to be of great help when you would like to understand yourself and your life better.

The Origins of Astrology

It might seem like astrology is a modern invention; the silly, unscientific sister of the more serious and respected astronomy. While astronomers discover new stars and planets, astrologers are often perceived as fortune-tellers, or even frauds, who take advantage of gullible people in need of advice. Yet, astrology and astronomy share ancient roots that stretch back to the great Babylonian culture of 2000 BC. This is when the positions of stars started to be used as a method of divination, which is to say that the night sky offered insights into patterns and structures in life and made meaning out of what often appeared chaotic. The processes of this kind of star-gazing gradually evolved into ways of measuring distances and encouraged philosophical speculations about the nature of the universe. Babylonian astronomy/astrology is considered by many to bring about the first scientific revolution, albeit one that was closely bound up at this time with religion.

Later came Hellenistic astronomy/astrology around 100 BC. This period saw the fruition of various forms of mathematics such as geometry and algebra which were used to map celestial events and phenomena and also to predict future movement. Astrology was also present in the Middle Ages as well as during the Renaissance. In fact, medieval astrological techniques are still used by modern day astrologers.

Towards the end of 17th century, however, new scientific concepts questioned the validity of astrology, eventually naming it a pseudo-science. The notion that structures and bodies present and in flux in the wider universe might have some effect on human affairs proved immeasurable and therefore fell outside the contemporary scientific remit. This was the era of the great Enlightenment which championed rational thinking – no bad thing – but what fell into the realms of superstition in this context persisted. Nowadays, more and more people are becoming interested in astrology even if scepticism towards this ancient divination practice still remains. As children of this universe, is it so strange to wonder if the universe itself might have something to teach us about ourselves, our births and our lives?

Natal astrology is all about your birth chart. A birth chart can be seen as a snapshot of the planets and their location on the zodiac wheel at the time you were born. In order to draw up your birth chart you need your full date of birth (day, month, year), place of birth (city, country) and if known, the exact time of birth. It is possible to draw up a chart without the time of birth, however, the placement of the moon might not be so accurate under these circumstances.

Every chart includes 10 planets (Sun, Moon and Pluto are considered planets by astrologers), 12 zodiac signs and 12 houses. Each planet reflects a facet of your personality, the Sun reflects your ego and identity, the Moon is about your emotions, Mercury is how we process information, how we think and communicate and so on.

The 12 houses correspond with different areas of life, for example resources, relationships and/or career. When an astrologer looks at the planets and their placements, they are able to describe the personality of the person as well as the way in which they approach life. As the planets can be placed in different signs, the chart reflects the complexities, contradictions and nuances of one’s personality. The regular magazine horoscopes look at the Sun sign, which divides everyone into 12 categories. However, if we look at the whole birth chart and take into consideration the Sun sign, the Moon sign and the rising sign, there are 1728 possible combinations, and there are more planets in the birth chart. There are also other elements which can be included such as asteroids or astrological points. These can add extra information and depth to the reading.

If this was not enough, the planets can make aspects to each other based on the number of degrees between them. As the birth chart is a wheel, there are 360 degrees. For example, if two planets are at 90 degrees from each other, they will form an aspect called a square. If they are 120 degrees from each other, they will form a trine. There are a number of aspects, with each aspect creating a different energy between the planets. Some of the aspects provide a harmonious flow of energy while others create tension.

When looking at a birth chart, the astrologer will be able to identify main themes and energies operating in your life as well as areas of tension and difficulty.  Areas of ease and potential are also explored in the context of your life-path and/or or karmic wounds. Therefore, a birth chart reading can be used as a great tool for self understanding and development, whether on a psychological or spiritual level. If you feel like you keep repeating the same patterns in life or feel lost, a birth chart reading can be of great help in figuring out who you really are and what makes you unique. 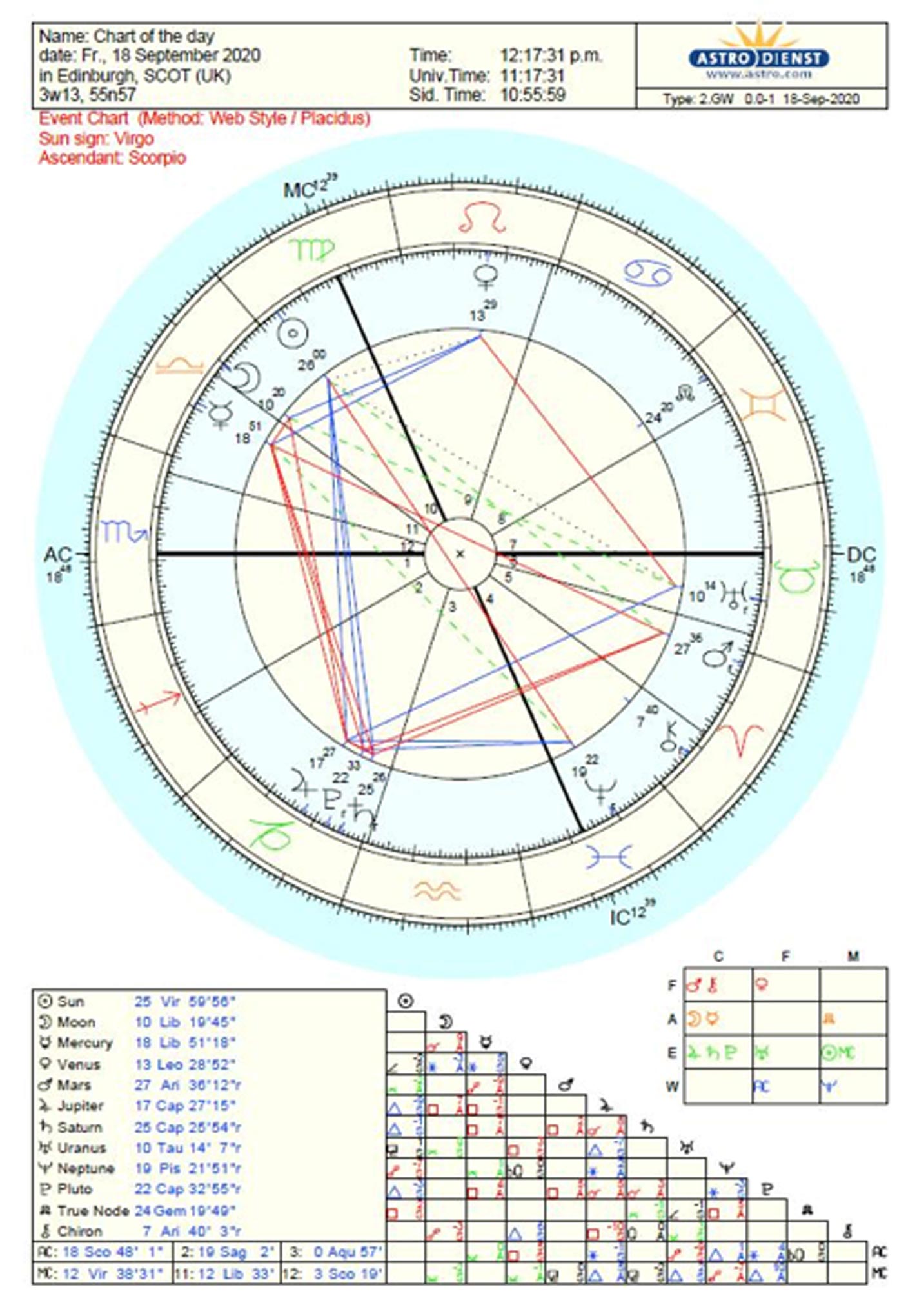 Another area worth looking into is predictive astrology. The planets are constantly moving and not only interacting with each other but also with the position of planets in our birth charts. The movements of planets are called transits and by looking at your current and upcoming transits it is possible to predict certain energies. For example, if transiting Saturn is coming close to your natal Sun you might experience this as feeling restricted, especially when it comes to expressing yourself. You might have more work and responsibilities as well as be forced to create structures in your life. On the positive side, this transit can bring recognition and rewards, especially if you have been working hard.

While exact events cannot be predicted, being aware of upcoming transits gives you time to prepare for them. When you embrace these energies rather than resist them, it is possible to make them work in your favour.

If you are going through a rough patch and feel like it has been forever, it is beneficial to check current transits. Sometimes it is a particular planet in contact with your chart that brings difficulties, changes and transformations. The astrologer can check when the planet will move out of the sphere of influence and help with understanding the lessons behind it.

There are also personal planetary cycles everyone goes through and which happen at a similar age for everyone. For example, the Saturn return at around 28.5 years, the Uranus opposition at 42 years or Chiron return at 50 years. The astrologer can explain how these cycles operate, what energies they bring and discuss the unique ways in which these energies interact with the rest of your birth chart.

These (natal and predictive) are just two areas of astrology, yet, they can provide you with plenty of useful and possibly life changing information. The starting point is your birth chart- get to know it and see yourself from a different perspective.

If you are interested in a Birth Chart Reading or a Predictive Reading, please contact us and we can arrange a consultation.

Kat Wojdyla is running an Astrology Masterclass in the month of October. Places are limited to 15, so if you are interested check it out today. Kat Wojdyla is an astrologer-in-training, particularly interested in psychological and karmic astrology. Her aim is to translate the astrological language into a personal story which can serve as a reference for personal development. After all, we are all part of the cosmos, participating in the infinite dance of planets and stars. You can either stay confused by the celestial spins or join the party and have fun.

Kat has studied astrology with Anna Estaroth from the Scottish Astrological Association, attended numerous workshops with Bernadette Brady and Darrelyn Gunzburg of AstroLogos and is constantly building on her knowledge of astrology through theoretical and practical approach to the subject.